Beginning to harness the desert’s light
The Top Environment story of 2011, according to JPost reader votes. 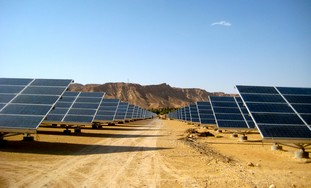 According to this article, 60% of the readers voted that Israel’s medium sized solar field was the biggest environment story of 2011 and 20% voted for Israel’s natural gas supply.
The solar field is the first of it’s kind and at 4.95 MWs, capable of powering a supply equivalent to 7% of Eilat’s energy needs.
Arava Power Company president, Yosef Abramowitz visions to fulfill one of David Ben-Gurion’s original visions.
The field is made of 18,500 photovoltaic panels from Chinise company Suntech, and runs directly across Highway 90.

Although, it took a long time to get this into usable, clean energy.
Abramowitz dubbed “Captain Sunshine” by kibbutz residents. and his partners fought 5 years to get the necessary permits to start building the field.
Because of this, Israel was left far behind European nations.

With the government’s July decision to approve a wide spread increase in renewable energy allocations, 460MWs will be produced by large solar fields in addition to the 300 MWs available by
medium solar fields.
This will definetely be the hope of clean energy.